journey northward. This moment on 25th December marks the December solstice when the SUN appears to stand still (stop) for 3 days 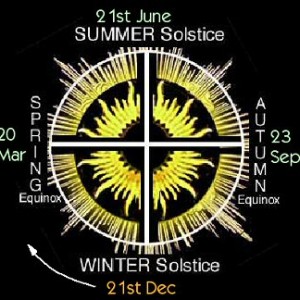 and 3 nights to be re-born on the 25th December, the official beginning of winter in the Northern Hemisphere and a time of great celebration in many northern cultures.

A solstice comes when the Sun is at the upper or lower end of its journey; an equinox comes when the Sun is halfway through each journey. The word solstice comes from the Latin solstitium — sol meaning “sun” and – stitium “stoppage.” Winter-solstice celebrations could well be the world’s oldest holidays. There are more known rituals associated with this solstice than for any other time of the year. Prior to the Christian era, Romans called this day Dies Natalis Invicti Solis, the Birthday of the Unconquered Sun. Earlier in Rome it was the time of Saturnalia, a notoriously wild holiday.