[dropcap] D [/dropcap]ave Feldman began a Low Carb, High Fat diet in April 2015 and after experiencing a significant drop in his total cholesterol he committed himself to learning everything he could about cholesterol and the lipid system.

It’s About Energy, Not Cholesterol

As an engineer, Dave spotted a pattern in the lipid system that’s very similar to distributed objects in networks. Through research and N=1 experimentation he has revealed some very powerful data which he continues to share in this presentation and in further detail on his website: www.CholesterolCode.com

Cholesterol is a passenger, not a driver.It “ride shares” with the energy you get from fat (Triglycerides) on Low Density Lipoptoteins (LDL).  This runs counter to medical mainstream opinion.

By Dave Feldman
I want to introduce you to something called Remnant Cholesterol. And if you’re on a #LCHF/#Keto diet, this will be especially relevant.

You can be forgiven if you thought Total Cholesterol was simply LDLc + HDLc. I thought so too before I was into keto since I was always told, “cholesterol is divided into two types, LDL and HDL…” — wrong! That little gap of cholesterol left over is very, very meaningful. When fasted, it is the cholesterol found in Very Low Density Lipoproteins (VLDL) and Intermediate Density Lipoproteins (IDL). When not fasted, it includes those two andChylomicron Remnants.

Why This is a Problem

You see, these lipoproteins mentioned above aren’t supposed to be hanging around in the blood for very long. VLDLs pop out of the liver ready to drop off fat-based energy in the form of Triglycerides (TG) from the getgo. They bounce around your vascular system binding to tissues that need the energy and get smaller and smaller from less cargo in the process. From there they are remodeled to IDLs, which are then cleared by the liver or remodeled again to an LDL. This succession of stages to the final LDL takes under 90 minutes. So how long do LDLs hang out? 2-4 days!

This is worth reemphasizing because it’s key to understanding Cholesterol Remnants. Again:

So given this, we’d fully expect that the vast majority of lipoproteins that originated from the liver would be in that final LDL stage, even if they started out as VLDLs, right? Yes, of course!

So imagine it this way… you have two jobs. When you leave the house in your car, you have a lot of food which you then drop off to people around the neighborhood who are hungry. This is supposed to take 1-2% of your time.

The other 98-99% of your time is spent doing the other job — patrolling the same area to help out in other ways. You might be doing citizen arrests of robbers (binding to pathogens) or helping out repairing houses that need it (non-hepatic endocytosis).

But what if there’s a problem with the roadways such as a traffic jam or you’re having a tough time finding people to take any of the food you’re offering (exceeded personal fat threshold). So now you’re spending much more time in that first job because there’s a widespread problem throughout the neighborhood that’s holding you up (and your fellow delivery drivers as well).

How They See It vs How I see It

I’ve been obsessively reading these Remnant Cholesterol papers for a while now. And this is a common opinion among them:

So VLDLs and IDLs themselves are “very atherogenic”?

As many long-time readers know, I certainly see the lipids and their containing lipoproteins in our bloodstream as primarily an energy distribution system. That first tiny little stage of delivering energy as VLDLs or Chylomicrons is arguably the bulk of their “work.” Sure, it is done so quickly that it might seem like it is a small part of it. But when you see their largest payload is fatty acids (in the form of triglycerides) and their most reliable “activity” is hydrolyzing it off to the tissues that need it, you realize these guys just aren’t procrastinators, they get the biggest job done early and quickly…

… except when they don’t.

I offer two major reasons VLDLs and IDLs would be slowed down from remodeling to LDLs:

The first point is well illustrated in many who have hypertriglyceridemia, a commonly associated CVD risk. Often they have a much higher proportion of VLDLs. Why? Not surprisingly, these are likewise associated with hyperinsulinemia and metabolic syndrome.

Broken Systems are Atherogenic, Not Lipoproteins

To put it simply, a problem arrises when the fat-based energy has few places for the VLDL to park it. Those places it does park often can’t stay there long if one is well past their personal fat threshold. The fatty acids keep spilling back out into the bloodstream, binding to albumin, and finally making their way back to the liver to… wait for it…get repackaged into a VLDL again. You see the cycle?

VLDLs, IDLs, and LDLs are not independently atherogenic, but a body that is undergoing oxidative stress, chronic inflammation, or hyperinsulinemia can be. Yes, lipoproteins participate in this process as that is one of the many “hats” they wear in trying to fight it off and/or repair it. But trying to identify a single lipoprotein to label as the bad guy misses the point of the larger perspective on what’s happening inside the body to begin with. 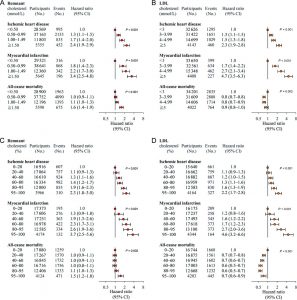 From this study: “CONCLUSIONS: Both lipoproteins [RC and LDL] were associated equally with risk of IHD and MI; however, only nonfasting remnant cholesterol concentrations were associated stepwise with increased all-cause mortality risk.” (See graphic at right from the study)

I’m hesitant to name any single lipid marker as the “best” one to measure. But if I had to choose right now, I’d be pointing to Remnant Cholesterol (RC). As of this writing, I haven’t found a single study that includes RCs in matchups with other lipids where it isn’t the clear winner in predicting all-cause mortality.

What This Means for Low Carbers

While I have read through a lot of these studies, I still consider this early in my research on it. I’m naturally thinking through the mechanics and how it applies to those who are LCHF and thus powered by fat.

Here’s a summary of my notes thus far:

Lastly, I should warn that much of the newer research on Remnant Cholesterol compares populations who have had non-fasted lipid numbers. I suspect this will not work for those on LCHF/Keto. I’ve already found in my own data and those of others that when on a fat-centric diet, you can often have higher triglycerides relative to a carb-centric diet when taking lipids while not fasted. Hello! You are literally observing triglycerides from the food you just consumed as part of the total amount found in the blood.

Dave Feldman is Dave Feldman is a senior software engineer, business developer and entrepreneur, he shares extensive resources and videos his website: www.CholesterolCode.com