Nikola Tesla TOLD Walter Russell To HIDE His COSMOGONY From The World For 1,000 YEARS!

Russell spent a full 7 years to complete his book “The Universal One” which was to be given ONLY to the top scientists during the time, so there was a limited amount printed.

Download this book FREE at the bottom of the page after joining up.

Nikola Tesla being one of the top Scientists/Engineers during that time met up with his friend, Walter Russell to discuss their ideas on cosmologies “, Tesla recognized the wisdom and power of Russell’s’ work and urged him to lock up his knowledge in a safe for one thousand years until man was ready for it. However, later on, because of how destructive humanity was heading, his wife Lao Russell felt it was necessary to release it to the public later on.

In one of Walter and Lao Russell’s books which is a masterpiece titled “Atomic Suicide?” Lao Russell wrote a brief introduction saying the following:

A list of the great educators and scientists, men who were associated with my husband during the more than forty years of his active work for the betterment of human relations in industry, would fill many pages. However, the list includes such men as, Nikola Tesla, Thomas Edison, and many others. Letters, autographs and other historical documents from many of these celebrities are part of the museum of my husband’s work here at Swannanoa. ~ Lao Russell

An exact science of the One visible and invisible universe of Mind and the registration of all idea of thinking Mind in light, which is matter and also energy

WALTER RUSSEL WRITTEN FROM 1921 TO 1947.
Volume One – First Principles

Walter Russell was born before his time; his words hold even more value today as we shed the old paradigm and old belief systems of Universal knowledge and our relationship with Creator/Source. He was of Christ consciousness and from the little I know about reading Jesus’s teachings, they sound very similar. That we are our own creators, that our mind will create our realities and that all knowledge is inside of us, we don’t need to learn, just remember who we are. Below is the first part of this book, if you like what he has to say, then search him out and read his work it is freely available online.

The secret of Light – Walter Russell

PRELUDE from the Book ‘The Universal One’

The supreme service which man can render to evolving man is to answer for him, dynamically, the great heretofore unanswerable question concerning the One universal force which man calls God or Mind, or by other names.

For long ages man has impatiently awaited the knowledge which would tear away the veil from the invisible universe which lies beyond his perception and bring it within the range of both his perception and his exact comprehension.

Mathematical and measurable proof of the existence of but One Mind, One force and One substance would give to man absolute control over matter, the power to create, even as God creates, and within the same limitations.

Man is omnipotent when he but knows his omnipotence. Until that day he is but man.

Voltaire said that man could never comprehend God for man must be God to comprehend Him. Man is God and therefore God is within the comprehension of man.

Man is mind.  Man is Matter.  Mind and Matter are One. God is Mind

A finite universe, in which the effects of cause are limited, must also be limited as to cause; so when that measurable cause is known then can man comprehend and measure all effects. The effects of cause are complex and mystify man but cause itself is simple. The universe is a multiplicity of changing effects of but One unchanging cause.
All things are universal. Nothing is which is not universal. Nothing is of itself alone. Man and Mind and all creating things are universal. No man can say: “I alone am I”. There is but one universe, One Mind, One force, One substance. When man knows this in measurable exactness then will he have no limitations within those which are universal.
He will then know that all knowledge exists within man and is subject to his desire to recall it from within his inner Mind.

Knowledge is not acquired from without but merely recollected from within. The recollection of knowledge from within is an electro-magnetic process of thinking Mind which is as exactly under man’s control as is the generation of the same power in turn a wheel.

Man must “think in light”; his thinking must be in terms of the electro-magnetic periodicities which measure all motion, for of such is he himself, and nothing else.
To know how to think in light from within is to open the doors of all knowledge.

Omnipotence lies in perfect thinking. There is no power in this universe other than energy of thinking Mind. Thinking is the cause of motion and the periodicities, or states of motion caused by thinking Mind are registered in light which man calls “matter”.

Matter is light. Nothing ‘is’ which is not light.

We are prone to think that this civilization of ours is an extremely advanced one. On the contrary, man of today is an exceedingly primitive state of his evolution. He is a bearer of heavy burdens, sweating at heavy labor in the bowels of the earth because of his pitiful ignorance of universal power which awaits only his knowledge to render it available for his free use.

Knowledge of the One Thing will lift the yoke which man has placed on his own shoulders. The knowledge is herein written down in the language of a new dynamic science of new concepts which are measurable, which explain the heretofore unexplainable.

Language is lacking in words to express new knowledge. Seemingly contradictory words must be used in the hope that the intent will be understood by taking all that is herein written and putting it together, rather than in trying to find comprehension through the analysis of a few inadequate words in isolated paragraphs.

For all those questions which lie unanswered within the heart of man there is a dynamic answer, such an answer as two and two make four.
Faith and theory regarding the universal One need have no place in the thinking of man. They are wanderings in the dark. All things are answerable in Light.

The universe is tonal one, a dimensionless universe of light.

All nature is a series of orderly tonal periodicities of the One force, assembled into the complex idea of thinking Mind, and registered in light, or matter, or energy in interchanging potentials, all of which are variable, yet comprehensible and measurable states of motion of the One substance.

Ecstatic man is he who can think in those high octaves of the inner Mind which has been termed “spirit”.

Inspired man is he to come whose thinking will be from within, in light, and it will be an ecstasy of thinking which will produce enduring things. That work which is created in ecstasy of inner thinking can alone endure.

To think in light is not a new power being developed by evolving man. It is a power which is now within him awaiting only his knowledge of the use of that power. It is merely the recognition by man of his absolute control of the many dimensions of the universal constant of energy which constitutes the thinking process of Mind exactly as he can control the changing speeds of his motor car.

When man can change the low speed of his objective thinking in this universe of dimension to the high speed of his inner thinking where dimension disappears in light, then he is superman. Then he is universal genius.

Light is the universal language in which the Divine Concept is plainly written. Fundamentally wrong in its basic premises, and wasteful in its practise, man’s modern concept of the universe must be torn down and built again on truth as plainly told in light.

Primitive in his concepts, man divides the universe into the seen and the unseen, then finds himself groping in the dark, blindfolded, hopelessly trying to find the way to the door of the Holy of Holies.

There is no unseen universe. The way to that innermost sanctuary of the Most High is as clearly posted as the Lincoln Highway; but man has not been able to read the plainly worded messages written all along the way in light.

Man’s most wonderful of instruments, the spectroscope, has told him little, for he has not yet learned to read it. He does not know that those many lines of light are but letters of the alphabet of light in which the universal One registers His mighty thinking in the universal language of light.
The spectrum of iron is to man naught but the spectrum of iron. To the cosmic import of those many glowing lines he is indeed blind.

Again, in helium he reads the lines as helium’s lines and sees not in them the plain story simply told of six new elements of vast import awaiting man’s use in the easing of his burden.

And of those most important of the elements, which man calls the “inert gases”, nothing at all is known except that they will not combine with any other elements. O the pity of it!

Wrong concepts of the atom’s structure and the modern electric theory, of energy and its transmission, of conductivity, radiation and gravitation, and of that electro-chemical state of opposed motion called luminosity, all of these concepts of motion, and of matter, must be remoulded on truth.

With truth comes knowledge; and with knowledge power to transmute at will and simply, plentiful substances of matter into those which are the rarest, to meet the needs of man.
There is no substance which nature produces which man cannot produce or synthesize, or “create”from apparent nothingness when he knows that which is herein written down and charted. Man’s miracles of today become commonplace events of tomorrow.

Civilizations come and go, exalted by man’s thinking or by it plunged into the abyss of darkened ages.

This message is for all mankind and not for the few, for it is placing within the hands a power which could either glorify or frightfully enslave him in accord with the usage of that power.

Either way it matters not, for in the end truth will survive, or man will complete his destiny. Truth lives. There is naught but truth and that which appears to be otherwise has no existence and therefore is not, nor ever will be. 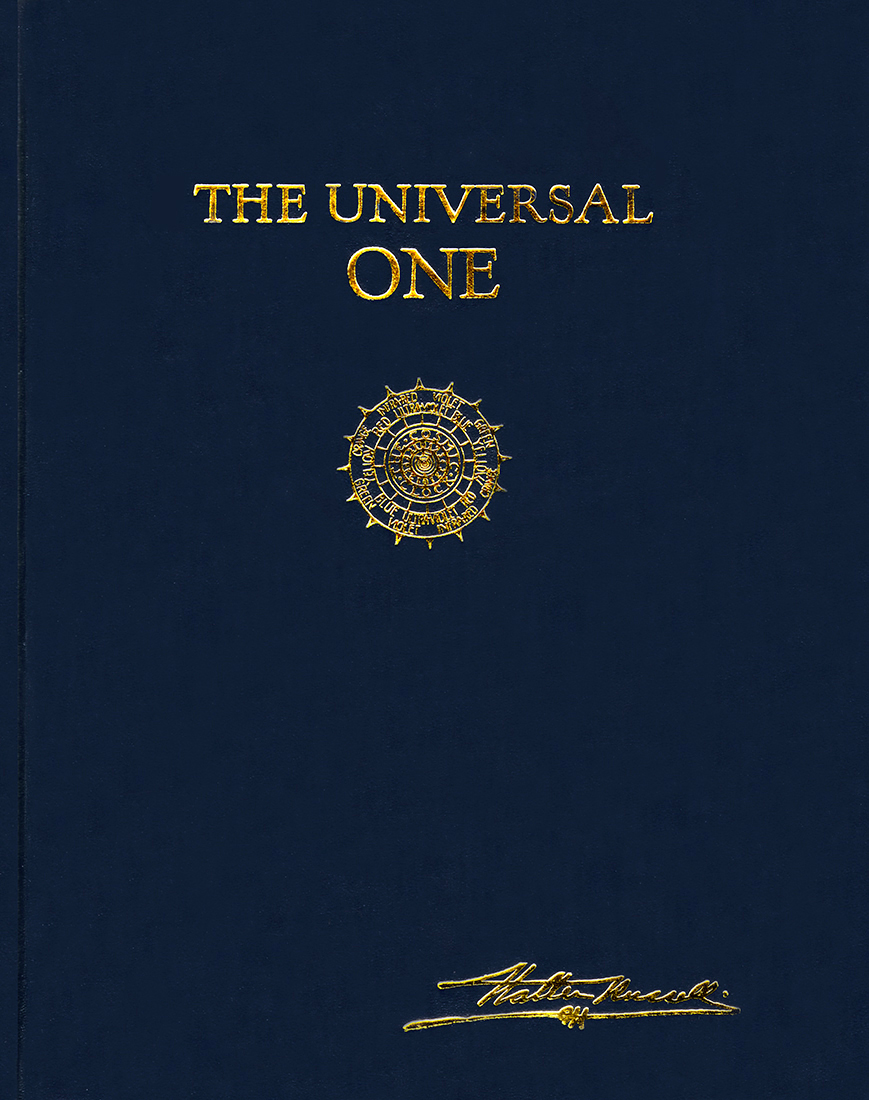 This PDF Book is yours completely FREE by just signing up today!

The Universal One is Walter Russell’s first expression of his new Cosmology explaining the Mind-centered electric universe.

Login To View or SignUp and return to Unlock The Content!