Millions of people suffer from gastrointestinal symptoms and distress each year. Diagnoses of Crohn’s , Celiac disease, Irritable Bowel Syndrome (IBS), SIBO and Auto-Immune Dis-eases continue to grow and researchers still can’t quite put their fingers on why our digestive systems are under attack. Leaky Gut or Intestinal Permeability seems to be at the root of these difficulties but by following the 3-phase HUG Plan you can restore your gut health.

We’ve put together a simple resource to take you step by step through the difficult task of identifying and resolving long term digestive disorders by providing you with the know-how and the materials to hopefully correct your GUT dysbiosis.

Leaky gut syndrome happens when your intestinal lining has become damaged as a result of inflammation,  irritation or SIBO.

Drugs, alcohol, gluten and processed foods can damage the lining of the gut wall. Leaky gut can also result from internal toxicity due to an imbalance of bacteria and yeast, which is called ‘dysbiosis‘.

This is a problem because food particles and toxins from the gut are released into the bloodstream, triggering an auto- immune response. A huge toxic burden is imposed on the liver. The liver is overwhelmed by digestive by-products, toxins and inflammatory irritants, and other organs are affected as well.

If you have been dealing with a ton of food sensitivities, and seem to be getting more sensitive to more foods all the time, it could be leaky gut. Instead of doing extensive allergy testing, we would recommend healing the gut, and sealing up those leaks.

The food is not the main problem: the problem is that the food you eat is escaping into the bloodstream and triggering an immune response, however we need to remove the most reactive foods from your diet while you heal, this can take as little as 6 weeks or as long as 6 months, it depends on how strictly you can follow the diet and the steps..

1. Glutamine
Glutamine is key for helping to heal the lining of the gut. The Phase 1 Bundle contains glutamine as well as aloe vera and deglycyrrhizinated licorice which also help to heal the gut.

2. Cleanse
The HUG [HEAL UR GUT] PLAN is the ideal protocol if you have leaky gut for a few reasons:

3. Probiotic & Digestive Enzymes
A strong probiotic is also essential for supporting your immunity and restoring the balance of good bacteria in the gut.

4. Bone Broth
Bone broth is also very healing for the gut. Incorporating a cup or two of bone broth into your daily routine can be helpful. We have more information and a bone broth recipe here.

Intestinal microflora, also called friendly flora or probiotics, play a role in regulating the immune system and keeping the colon healthy. However, most of the bacteria in your intestines should be in your colon or large intestines, not your small intestines.

These bacteria feed off of sugars and starches in the diet (both refined sugars and natural sugars) and produce methane and hydrogen gas. They also inhibit the enzymes in the small intestines that breakdown starches into simple sugars for absorption.

This can result in abdominal bloating, belching and/or flatulence (intestinal gas), especially when you eat grains and other complex carbohydrates. The gases produced by these bacteria can also cause abdominal pain, intestinal cramping, and IBS with constipation and/or diarrhea.

Gas pressure in the small intestines can push upwards against the stomach, contributing to the development of a hiatus hernia and causing heartburn, acid reflux, GERD and nausea. 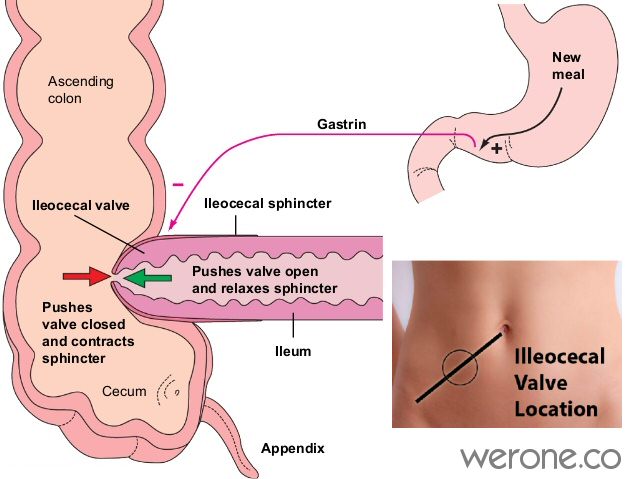 The body has several different ways of preventing SIBO. These include gastric acid secretion (maintaining an acidic environment), waves of bowel wall muscular activity, immunoglobulins in the intestinal fluid, and a valve that normally allows the flow of contents into the large bowel but prevents them from refluxing back into the small bowel. (This is called the Ileocecal Valve because it’s located between the Ileum, or terminal end of the small intestine, and the cecum, a pouch forming the first part of the large bowel, it can become infected with bacteria and constipation fecal matter which causes inflammation and holds it open (or closed). Massage can usually correct this provided there has not been a spinal or nerve injury causing it.

The cause of SIBO is usually complex, and likely affects more than one of the protective mechanisms listed above. A number of risk factors for SIBO have been identified, with some of the more common risk factors listed below.  For a more complete discussion of associated diseases and risk factors check out this study and this study.

Heavy alcohol use has long been recognized in association with SIBO (3).
This study also found an association between SIBO and moderate alcohol consumption, defined as up to one drink per day for women and two drinks per day for men. Alcohol appears to have effects on several of the normal protective mechanisms, including causing injury to the small bowel mucosal cells, contributing to leaky gut, and decreasing the muscular contractions. >

Additionally, alcohol may “feed” a few specific types of bacteria contributing to overgrowth (4).

Overall there appears to be a moderate association between OCPs and inflammatory bowel disease (IBD) such as Crohn’s disease (5=). Though no studies to date specifically correlate the use of OCPs with SIBO, given the known relationship between IBD and SIBO, it is likely that this association holds true for SIBO as well. However, once patients stop taking OCPs, this risk appears to reverse.

How do you know if you have SIBO?

The number of people with SIBO in the general population remains unknown. Some studies suggest that between 6 to 15% of healthy, asymptomatic people have SIBO, while up to 80% of people with irritable bowel syndrome (IBS) have SIBO (6).

SIBO is largely under-diagnosed. This is because many people don’t seek medical care for their SIBO symptoms, and because many doctors aren’t aware of how common SIBO is. Complicating this, the most commonly used tests (breath tests measuring levels of hydrogen and methane gas) still have fairly high rates of false negatives (meaning the test results come back as negative but you actually do have the disease) (7).

The most common symptoms of SIBO include:

Next: Starting Phase 1 (Download the FREE ebook and follow the plan, we provide you the guidance and many of the hard to find ingredients)