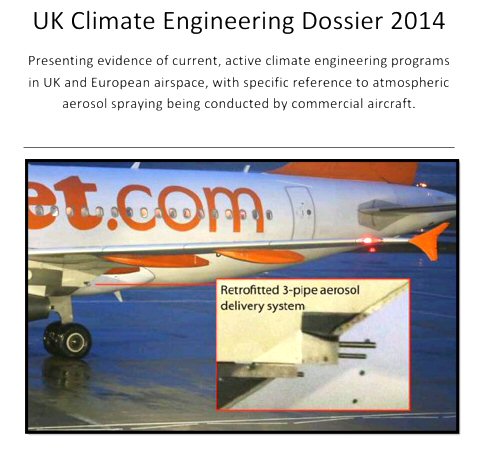 by Ian Simpson
“In April 2013 I first noticed unusual aircraft activity in our skies near London. Groups of planes travelling in very close formation at low altitude, around 22,000ft, leaving dense persisting trails. The trails from these aircraft did not disperse as one would expect, but lingered, expanding slowly to form what can only be described as a thin cloud-like layer across the entire sky. The sky went from clear blue at dawn to completely grey by late morning, and purely as a result of trails left by repeated passes from planes. Since that day I have investigated this phenomenon in great detail.
The evidence I have collated here gives a comprehensive picture of what can only be described as active climate engineering, or weather modification programs, being conducted in UK airspace, European airspace, and if reports from other parts of world are to be believed, then pretty much everywhere where commercial airlines involved in these programs happen to fly. These programs are being conducted in UK airspace by commercial airlines, both UK and internationally based.

The aircraft seen to be leaving low-altitude trails are mostly Airbus A320 family and Boeing 737 and 777 models, though other models may also be involved as detailed in the body of this document. All aircraft that are seen leaving low-altitude trails have been modified with pipes in the pylon. Those pipes are not standard to the design of the aircraft.

We know this to be the case, at least for Airbus, as Airbus recently confirmed to us that their aircraft do not leave the factory with pylon pipes. Every day now our sky, and the air we breathe is affected to some degree or other, and even completely defined on many days, by substances sprayed from aircraft.

Several different types of programs and substances have been identified to date as will be described in the body of this document. This situation is completely unacceptable. No public consultation has been conducted, and no public approval has been gained or even sought. Public debates on the issue have been sparse and have focused on, and tried to imply, that these programs are only being ‘considered’ and are not yet being implemented.

Download the FULL Dossier
Related Articles:
The ‘Flat Earth Madness’ Psyop
The Illuminati Aren’t The Problem – We Are!
Natural Law – The ‘REAL SECRET’ behind the Law Of Attraction
The Fear of Freedom
The Origin of Today’s Medical Doctor and Big Pharma
You are not Your Thoughts – this is an illusion
Psychiatry is a Fraud, It’s All about Control
The holographic disclosure – Amazing 16-part series
The Greatest Truth Never Told
Hyper-Normalisation – The Fake World Humanity Has Retreated Into
The Cult Of Ultimate Evil – ‘Order Followers’ & The Destruction Of The Sacred Feminine
What is Wrong With Our Culture? – by Alan Watts
9/11 – The Truth In Just 5 Minutes!
Is Facebook The Ultimate Expression of Narcissism? – Watch This Video
Surviving Progress : What is Progress? – Great BBC Film
The Real Da Vinci Code – Written in Stone – The Vitruvian Code
No-One is coming to Save You, But This Will Help
Lets Stop calling it Money! The Fraud That is Fractional Reserve Banking

NOTICE: It is currently taking 5 - 6 days to ship orders, there are also delays with international post. Dismiss