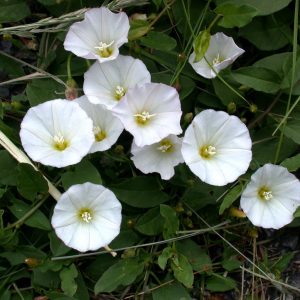 [dropcap] D [/dropcap] diagnosed with ovarian cancer, a woman walked out of her doctor’s office in search of an alternative treatment. Her mother had died of the same disease seven years earlier, and this woman’s doctor felt her chances were equally bleak. So she traveled to Oklahoma from her home in Kansas, where she met a shaman who gave her a tincture made from a common (and— among gardeners—universally hated) plant.

She faithfully used the tincture every day.

She started to feel her symptoms melting away, and after a year had passed her shocked doctor pronounced her cancer-free. This woman, though she’s never shared her name, couldn’t wait to share her story. One day, she showed up at The Center for the Improvement of Human Functioning International, a Kansas clinic dedicated to cancer research and treatment. She eagerly told her story, and the team at the clinic found her tale so compelling that they immediately began research. But they were puzzled at first.

The plant didn’t seem to kill tumor cells or boost the immune system. It took almost four years for them to find the answer—and, in a twist out of the movies, it turned out that what made the plant so hated was just about the same thing that made it a breakthrough in cancer treatment.

Gardeners and farmers absolutely hate it. Bindweed (Convolvulus arvensis) may feature lovely flowers, but it will methodically invade, entwine, and choke surrounding plants, costing over millions in crop losses in the United States alone each year.

But, as these things usually happen, there’s an ironic twist. That same choking action, loathed by farmers, is loved in the cancer lab. Because an extract of bindweed, comprised of proteoglycan molecules (PGMs), has demonstrated an ability to do the very same thing to tumors. You see, in order to survive, tumor cells have to have a blood supply. The body isn’t interested in providing them with one, so they have to trick it by releasing chemicals that shift the body’s production of blood vessels into overdrive. The new blood vessels help tumors to grow unnaturally fast.

As they feed off these new nutrient supplies, they grow stronger and harder to fight. But PGMs bring this growth to a screeching half. After finding their answer, the team at the clinic tested the extract in animal models of various tumors. In each case, it was able to inhibit growth by 70-99.5%. Triumphantly, they classified it as an all-tumor inhibitor, equally effective in inhibiting the progression of all tumors. Used with an immune stimulant, it was even more impressive.

It all comes down to angiogenesis, the process in which new blood vessels are created from existing networks in the body. In a healthy body, it’s a stop and go process— blood vessels grow, and the brakes are put on before the new growth gets out of hand.

In women, this process occurs monthly during the menstrual cycle, as the lining of the uterus is rebuilt. And in both men and women, angiogenesis is essential to tissue repair after an injury. But in the case of a tumor, blood vessel growth gets completely out of hand—cells divide more rapidly and spread more quickly than they normally should. This is because tumors secrete substances that block the normal “braking” that should be part of the angiogenesis process.

PGMs work on a particular chemical involved in angiogenesis. Called vascular endothelial growth factor (VEGF), it helps tumors’ blood vessels thrive. Research has shown that cancer, particularly breast cancer, is linked to too much VEGF showing up in the blood. It’s thought that this overexpression is an early step in metastasis, as tumors feed off the new blood vessels and grow larger.

Basically, the more VEGF in the blood, the more likely angiogenesis is going haywire. Inhibiting VEGF cuts off angiogenesis, leaving the tumor to starve. For a while, shark cartilage seemed to be the gold standard when it came to natural inhibition of angiogenesis.

But the supporting data was conflicting, and resources are limited, making it expensive. However, PGMs have been found 100 times more effective than shark cartilage when it comes to regulating angiogenesis. Researchers working on PGMs knew they were onto something when they conducted a chicken egg chorioallantoic membrane assay. This is a way to test human tumor cells in conditions similar to those in the human body.

Proteoglycan extract (PGM) was tested for anti-angiogenic and immunostimulatory activity. PGM is a non-toxic extract from the ubiquitous plant Convolvulus arvensis. In the chicken egg chorioallantoic membrane assay, PGM inhibited new blood vessel growth up to 73% (See figures 1 and 2). Abnormal cell growth was inhibited by up to 96.8%. The ability of PGM-treated phagocytes to phagocytose yeast cells was 85% greater that controls. ConvoStatin is a proprietary extract of Convolvulus arvensis that contains high concentrations of active PGM’s.

In this test, PGMs inhibited new blood vessel growth up to 73%, and cut abnormal cell growth by up to 98.6%. In a test on mice, the extract inhibited tumor growth by an impressive 70% when taken orally.

In another, the inhibition was at 96.8%, regardless of how the dose was administered. Researchers declared PGMs “a potent angiogenesis inhibitor” and also noted its support of the immune system.

Tumor growth in various studies was stunted at non-toxic doses (you can’t say that about chemo, can you?). In fact, no toxicity was found in test animals in doses up to a human equivalent of a whopping 1,400 grams. It is important to note, though, that bindweed does contain toxins before the extraction process. So you can’t use the whole plant—the good stuff is in the extract.

It’s a frightening and disheartening pattern: A tumor is surgically removed, the patient is declared cancer-free, and then it returns. Nearly 50% of cancer patients experience growth of metastases— and it can be years after the original tumor is removed. A group of doctors at Harvard struggled for years with the question of why new tumors develop after treatment—and, more importantly, how to keep it from happening.

Those tumors can’t grow new blood vessels, and so they lie dormant. But—remove the first tumor, and those microscopic tumors suddenly don’t have anything keeping them from growing their own networks of new blood vessels. In one experiment on mice, researchers removed the primary tumor from mice with lung cancer, and saw an “explosion” of metastatic growth within just five days.

Within two weeks, there were so many tumors that lung function was completely taken over. So, finding a substance that prevents tumors from building this network of blood vessels is essential to people undergoing conventional treatment. Researchers started developing angiogenic inhibitors in an effort to block metastatic growth. This led to a few mainstream solutions, most notably Avastin, which puts the brakes on angiogenesis, but can lead to a whole slew of potentially devastating problems (see sidebar). Why use the mainstream’s flawed and dangerous drugs when a safe and natural option is available? An extract of bindweed, rich in PGMs, is available in a product called ConvoStatin.

Choke out cancer with the most effective angiogenesis suppressor out there Doctors and patients alike are impressed by C-Statin’s ability to choke out cancer. Dr. Freidrich R. Douwes, of the St. George Clinic in Germany (a clinic devoted to alternative cancer treatments), is a big supporter of bindweed extract.

He praises it for being the most effective suppressor of angiogenesis he’s come across, and uses it with most of his patients at the clinic. Jeff Marrongelle, who has been in practice in Schuylkill, PA for 15 years, has found bindweed extract an invaluable tool in his clinic.

If it doesn’t shrink the tumor, he notes, it stops the progression and growth long enough to add other therapies. Every one of his patients who has used it has had positive results. Another naturopath, Mary Shackelton of Boulder, CO, reports that her patients feel better and find their symptoms reduced on PGM. Nancy Taylor, a 52-year-old woman from Arizona, has stage 4 metastatic breast cancer. Her white blood cell counts have only been considered low once in the past six months, and she fully believes it is due to taking bindweed extract.

Convolvulus is derived from the Latin, convolere, meaning “to entwine”, and arvensis, meaning “of fields.” The genus convolvulus contains about 250 species.

Convolvulus is an ubiquitous weed, but arvensis is understood to contain alkaloids that are toxic. However, extracts of the plant, largely comprised of proteoglycan molecules (PGMs), appear nontoxic in animal studies, and have been shown to have potent anti-angiogenetic effects.

Because of an anecdotal report of complete remission of human ovarian carcinoma after ingestion of convolvulus arvensis extract, it was tested for its anti-angiogenic and immunogenic effects. It was found that its high molecular weight water extract contains almost no appreciable amount of alkaloids (devoid of its inherent toxicity) depleted during the extraction or manufacturing process.

In summary, convolvulus arvensis extracts show profound promise as anticancer agents, largely through the ability to inhibit angiogenesis, and the weed’s stimulatory effect on the immune system. The exact details regarding its anti-angiogenesis mechanism are not completely understood, and should be studied further to elucidate its anti-tumor effects and mechanisms of action.